I’m not really enthusiastic about the constant onslaught of technology on motorcycles …. the cynic in me sees mostly a revenue-earning exercise whereby the benefits to you and me are far outweighed by the locked-out, take-it-to-the-dealer and be fleeced mentality of the manufacturers.

But occasionally I do spot something that tweaks the nose of my flagging interest …. this time it’s been the BMW Dynamic Brake Light system. Trying to get the myopic, half-asleep nit-wit to notice the difference between my normal braking and HARD BRAKING is sometimes a real issue. There’s nothing worse than gliding to a halt only to hear some plank with full ABS active about to kiss my back wheel! Hmmm so how hard can it be to make a box of tricks to do the same as the BMW system and fit it on the Capo …..

Well a tad more difficult than I first thought that’s for sure! The BMW system seems to work as follows: 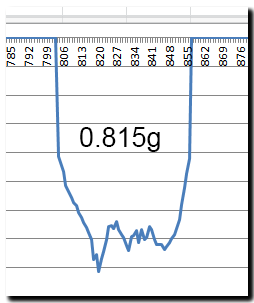 So how to replicate this on the Capo? Enter one test-box to get things started …… a microcontroller that measures acceleration in three axis and has inputs/outputs to the brake light, hazard lights and speedometer. The box of tricks is designed to allow normal brake/hazard light function in case of power or hardware failure … all in the name of safety don’t ya know.

Getting usable data from the accelerometer was harder than I thought ….. the thing is VERY sensitive and has needed a lot of filtering and data-smoothing to get usable info from it. But after a couple of days and quit a few emergency stops (all good practice!) the data is starting to look good.

Next up, I need to input the Capo’s speed to the microcontroller. For this I’ll use the speed output pin directly from the dashboard – I knew it would come in handy one day! All the inputs are buffered with opto-isolators to make sure the system is as well protected from the noisy fluctuating voltage in the Capo’s loom as is possible. Now with the prototype well under way, it just remains to find answers to some other  questions ….. such as what about braking on wet, loose, icy surfaces where deceleration will be significantly less, but the dynamic brake light might still be useful. My guess is the BMW system has some integration with the ABS system to shift the triggering point, but I don’t have ABS! This one I’ll have to ponder on a while longer.

One things for sure …. you learn a lot about braking forces, motorcycle dynamics and breaking code doing this malarkey! Oh and I’ve found out that a warm front tyre breaks grip at about 1.1g …… 😳