The Pneumatic Power Clutch (PPC) or ‘slipper clutch’ is made up of several integrated components. The throttle body itself which (with the engine) provides the vacuum, one or two check valves, a variable valve also in the throttle body and of course the diaphragm operated clutch itself. 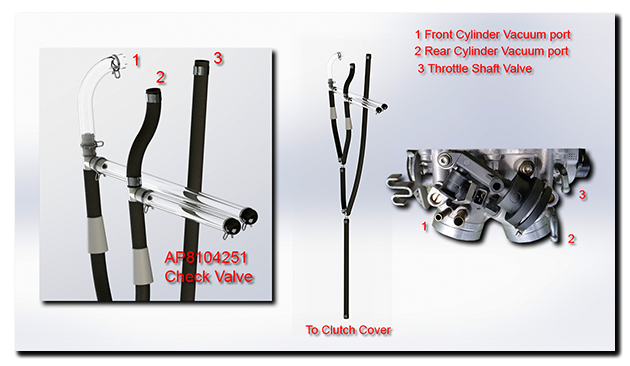 Let’s first look at a simplified version of what’s fitted so we can better understand the operation of the full assembly. I’ve done this as a pneumatic circuit diagram. 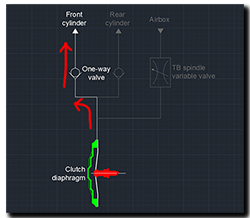 In the diagram above we have one vacuum port, one check valve and the diaphragm/clutch assembly only. When a low pressure (vacuum) in respect to atmospheric pressure is provided by the front cylinder port, the check valve opens and the air pressure in the line/diaphragm drops and the clutch pack is opened. If pressure at the port increases, the check valve closes and the line/clutch should remain at low pressure – as long as no leaks are present in the system. So here’s the question ….. If the clutch pack is now open, how does it close?

Now I’ve added the second part of the circuit. This is the variable valve which sits behind the TPS (Throttle Position Sensor) and is part of the shaft that rotates when the throttle is opened and closed. When closed this valve provides a highly restricted path to atmosphere (in the airbox). This path becomes progressively less restrictive as the throttle is opened – hence a variable valve. This valve is NEVER fully closed for a reason, more on this in a moment.

So now let’s consider its operation. The bike is coming down from high-speed, the throttle is closed and we’ve banged down a couple of gears so we’ve got high revs and good engine braking …. In other words, good vacuum being generated in the throttle bodies. This high level of vacuum easily overcomes the small amount of atmospheric air bleeding back through the variable valve – in other words the line/clutch diaphragm are at low pressure (vacuum) in relation to atmospheric pressure and the clutch pack is being opened – the amount depending on the strength of vacuum. Now we have to consider each one of the two possible next stages.

So the main difference is that in the first case, the system will return to normal operation on its own due to a small controlled bleed through the variable valve and in the second the clutch closes quicker due to the increased rate of bleed air through the same valve when opening the throttle.

So why use a variable valve not a simple open/closed valve? My guess is that it’s about control. If the clutch pack closed instantly the moment the throttle opened then traction could be compromised or a rider control issue could arise. The pack needs to close in a controlled manner, even if that’s only over a few tens or hundreds of milliseconds.

And why does the valve pass air even when closed? Again a safety issue I think. Imagine the valve was fully closed when the throttle was shut. The clutch pack would remain open permanently because the lines and check valves make the system fully air-tight. So if a rider had closed the throttle and never reopened it (emergency stop for example?) and the pack was still open, then the moment they cracked the throttle open to pull away air would bleed back in via the variable valve and the clutch pack would close likely causing a clutch/throttle control issue as they try to pull away.

And finally, why two valves on some bikes and one on others? Possibly this is due to the different clutch/packs used. The later (thicker) pack may well require a stronger vacuum to open it the same amount as the older pack due to the clutch springs being compressed more. Hence using both cylinders – two vacuum pumps to provide more (and consistent) vacuum.