Where to start …. ‘wow, what a week’ … doesn’t quite seem to cut it really! 🙂 I guess it’s fair to say we were in a bit of a state of shock on the Friday/Saturday following the evacuation notice/snow-storm and then of course, having no electricity, phone/Internet just put the icing on the cake. We began packing but were so distracted by inner thoughts that we seemed to have no direction or purpose – stuffing all manner of things in bags willy-nilly. Honestly, looking back now I think it was more like Shaun of the Dead meets Supermarket Sweep! The word on the grapevine was that power would be anything up to a month as so much of the infrastructure is down. In the end the region has poured in loads of industrial generators to power groups of homes – ours went online at 18:30 Wednesday evening, so that’s at least 6-8 happy families in our neck of the woods!

Today we took a drive out in the sunshine and popped in to the machine shop to see if Gabriele could knock up a part for the Capo – ready tomorrow afternoon he shouted cheerily over the generator running full tilt outside the workshop door. You can’t keep a good workshop closed for long! On the way we saw first-hand more evidence of the damage to trees, power and telecom lines, and also the speed the system gears up to get services back on line – generators being installed or chugging away merrily on a street corner, a fleet of trucks loaded with new poles heading inland, cherry pickers and workers buzzing around pylons and substations.

The word in the media seems to suggest that this was the worst the region had experienced since the 1950/60’s and that two villages 40 minutes drive south of us may have broken the world record for snowfall ….. over 100 inches (2.5m) in 18 hours, apparently that’s more snow than Boston had in Jan/Feb! Here’s a couple of links:-

Unfortunately these kind of events have a knock on effect ………… and that means for the forseeable future there will no longer be any Caponord/Futura dashboard repairs until life returns to some semblance of normality, sorry folks.

A quick update and a heart-felt thank you from Jan and I for the kind messages of support. The storm destroyed our road, half a valley, felled power and telecom lines and ruined about 20% of our Olive trees. On the bright side the house and barn are fine!

The evacuation order will only be lifted when the road is repaired …… and that I fear will be well in excess of the one month they told us. Looking at the damage, it will be more like 6 months……so we are now looking at our options.

First we have to obey the evacuation order and leave, second I have to somehow extract the Capo. If the weather holds I may be able to ride over the other side of the valley (thank God I hadn’t swapped out the Karoo 3’s for the Anakee 3’s!) ….. if that’s not possible then more drastic measures will be called for because she sure as hell isn’t staying there!

As a neigbouring farmer said yesterday “Abruzzo e stato massacrato” ……. Abruzzo has been massacred. Said it all really …….. 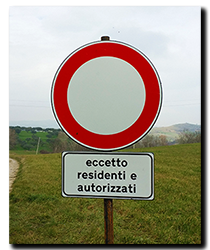 We’ve had a bit of a rough start to 2015 in the Abruzzo region, well actually that’s not true ….. it goes back to the tail end of 2013! That’s when we had the first of the terrain-changing rain and snow fall. The following months seemed to fair no better, with higher than average rainfall throughout 2014, so much so that the Olive fruit fly thrived in the humid conditions and the Olive harvest crashed into a national disaster. We all so wanted 2015 to fair better ……

…… alas that hasn’t been the case. More rain and snow has seen numerous landslides throughout the region – our own road included. Only a few kilometers away in Civitella Casanova 45 people have been evacuated and homes destroyed because of land slippage. Roads are closed all over the region and teams of specialists have been drafted in by the authorities to help deal with the situation.

But it seems life has one more kick up the arse for us ……. yesterday was sunny, almost 20c with a light breeze. Today is 2c with heavy snow and winds forecast to possibly top 100Km/Hr

and it will last 48hrs, with another 48hrs of rain following on. Of course that’s only the start of it, any extra damage will be slow and insidious over the following weeks as the already saturated land tries to absorb the extra water ….. my gut feeling is that it won’t cope, it’s already at capacity and that can only lead to more landslides. 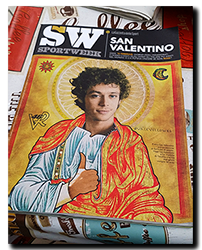 Melodramatic? Maybe. But two weeks ago we were told that the authorities were considering re-locating use. We got a reprieve because we have no kids or elderly here, nor do we require regular medical attention plus none of the damage was within a few hundred meters of our home.

I have to say, we’ve had better weeks. But then out of the blue, life has a way of throwing you a bone, a little something to bring a smile to your face. In this case a snappy supplement cover of ‘Saint Valentino’! Reading that mag over a hot brew and suddenly things don’t look so rough ………

Seconds after hitting the ‘publish’ button the phone rang ….. guess what, they were serving an evacuation notice on us in the middle of a raging snowstorm. I honestly can’t think when Jan and last felt so low ….. me, I just want the Capo out of here …. and us with it.