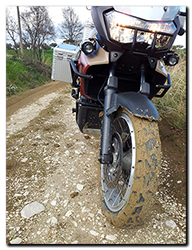 Ok I admit it ….. I posted these shots up on the AF1 forum first, but I thought I’d load them up here for posterity. If you’ve seen them already – tough, get over it! 😉

The Capo and I got caught out on a little muddy patch that appeared after a particularly windy day blew some of the neighbours field across a local road. Harmless when dry, but it took on the consistency of a melted hazelnut choc bar …. the one you left on the car dash when you went shopping last summer, yes that one. 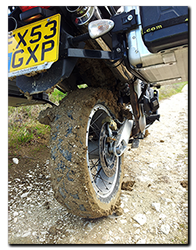 So as I rolled on in, it peeled off with the stone surface wrapping around my wheels and jamming everything solid …… enough to leave stress marks in the plastic where it was trying to lift the mudguard off! Oh joy, what fun! Stuck in Beelzebub’s play-pit on tip-toe and not a soul anywhere in sight to help.

How I got out and back home is just a blur, a snapshot of tears, tantrums and praying to any passing deity within earshot … but we made it. Like Thunderbird 2 on telly, the jet-washer was rolled out and away we went, me blasting away, the sun mercilessly trying to bake this stuff on …. it was a close call I can tell you. This stuff sets like cement!

Note to self …… when it’s winter, fit the bloody winter tyres you Muppet.

Keep it shiny side up – KarlB

Sorry folks I’ve just got to get this off my chest before I explode in apoplectic frustration ….

Have you seen the film ‘2001’? Remember the computer – HAL? Did you know the name was a little in-joke by the director because if you add a letter, H becomes I, A becomes B and L becomes M making IBM the (then) biggest and most memorable of computer companies.

So now I’m going to bemoan a courier company, not a little provincial one, but a global name known to most. Let’s call it CGK (work it out!). Here is a company that can prove a committed and sustained level of incompetence that is truly inspirational, indeed the sheer magnitude of its ineptitude is breathtakingly staggering and that takes some commitment. Why?

Because every time we have been unfortunate enough to have an incoming parcel handled by them, they have delayed, mislaid or attempted to deliver to a completely wrong house – all while having parcels that are clearly marked with our address AND phone number. We invariably get embroiled in numerous (premium rate) phone calls trying to track the damn things down. The first bit of glorious stupidity comes in the form of the tracking number. The number that should tell you where your beloved brown box is at any one time … but stops at the border, changes from 12 digits to a new 10 digit number and is known only to some secret squirrel in a call center!

And so it goes on, more phone calls … ‘the name is wrong on the package, but the address is OK’ …… ‘the courier tried to deliver twice yesterday’ ….. ‘they only deliver on a Tuesday or Thursday’ …. ‘it’s on a canoe heading for Nova Scotia’. OK, I made the last one up, but the others are genuine. Frankly, I give up. If these bunch of clowns were the only postal/courier company in existence, I’d buy some new boots and start walking the package to its destination, it can’t be any slower that’s for sure.

Deep breath …..and release slowly ……. ahhhhhhh, I feel so much better now!

UPDATE: 5 minutes after posting, the phone rang …. it was a courier. In the end I got the parcel an hour later, after a 16km round trip to a local village because he didn’t know the area and frankly didn’t want to. So there we stood in the piazza as I signed his 21st century electronic gizmo, him cutting a dash in his corporate sweatshirt and cap while his 20 year old van wheezed and creaked on its springs in the wind. I don’t think it would have survived our road after all! 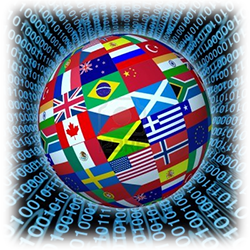 My wife came up with a great idea recently. Why doesn’t moto-abruzzo host a collection of guest authors from around the world on the lead-up to the 2013 ACIM event?

Hmmm ….. I thought, she just might well have something here!

So I’m looking for budding Caponord owning authors from around the world, willing to submit a piece of 1 to 1½ sides of A4 – about 400 – 600 words. At a minimum the subject should be about motorcycles, preferably with the Caponord in their somewhere, maybe not the central subject but somewhere on the fringe none the less. Talk about your country, what seems day-to-day for you will be intriguing and interesting to others. Your best places, best roads, breakdowns, frustrations, living with the Capo – ANYTHING! Just try to view your world with fresh eyes. And of course, plenty of photographs!!!

If enough participate a new post will be uploaded weekly from early May until the ACIM meet on the 12th-14th July – 8 to 10 weeks or so would be nice. The event will end with a final write up about ACIM and hopefully something a little special! Depending on the number of people who may be interested in doing this, then I’ll either post a little more frequently, or start earlier – who knows!

Interested? Then either PM me through the AF1 forum or use the contact page above for more information.

Quills at the read Caponaughts!!!

Sorry folks, only found out yesterday that the contact page wasn’t sending me anything. If you’re reading this and sent something recently – and no doubt thinking I’m a miserable sod for not responding, I can only apologise. I think it’s sorted now and you should get an auto-response as confirmation you’ve sent me a message. Isn’t technology so wonderful sometimes!

Details are out for this years ACIM (Aprilia Caponord International Meet) – can you believe this is the 5th one? This year the event takes place at Flims in Switzerland on the 12th/13th/14th of July. Click on the graphic on the right to go to the website.

I’m really hoping to attend this year as I’ve missed the last three because of other commitments. With any luck, this ties in very nicely with a trip back to the UK and only takes me about 100km off route, so no excuses really.

Along with Mike081, I attended the first one held in Verbania, North Italy. Since then they’ve certainly played on the ‘International’ aspect with No2 held in Slovenia, No3 in Portugal and No4 in France. These guys put an awful lot of effort into this and it shows. From registration, to the ride-outs and the fantastic choice of restaurants after a fun days riding – meticulous preparation makes it all look seamless.

I’m sure the event will be well represented by the Italian and Eastern European riders, with French and Spanish in strong support …… all we need are a few more souls from the UK to brave the English Channel!