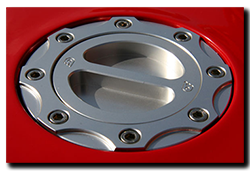 The Motrag radiator guard has been on the Capo for about 6 weeks/4,600 miles. In that time it has been through driving rain, blazing sunshine and a temperature range of 7C to 35C. Not exhaustive, but a reasonable range of conditions and mileage on which to update the original review.

I don’t know about your Capo, but mine has always had a bit of ‘character’ when it comes to engine-temp versus ambient-temp. Below 25C ambient, the coolant will read a rock-solid 75C day in, day out. But as soon as the ambient temperature begins to rise above 25C, so will the engine-temp. By 35C outdoors, the Capo will run at no lower than 78C AND get hot under the collar when stationary far quicker. Quite understandable and besides, it has done it from day one and never changed – even when the coolant has been!

So how did the guard fare?

Conclusion: This is a quality product at a good price that does the job intended and (to my eye) looks jolly nice as well. Protection, durability and aesthetics for under €70 can’t be bad in my books …. and if your reading this Manuel, bag up another one please for the second Raid! 😀

It seemed like the remaining miles were clocking up painfully slowly although the cruise control was locked at a solid 80mph (130Kmh). Here we are then, the Capo and I heading back to the UK and currently passing through Verdun, a section of motorway with bends and hills – certainly a touch more interesting than the bland featureless flat-lands of Northern France that’s for sure. Finally the odometer clicks over one more mile and we’ve done it – 100,000 miles!

I pop the hazards on and roll to a halt on the hard-shoulder. The traffic is light and I’m only stopping long enough for a quick photo, I know I shouldn’t, but this one’s a biggie!

We’re not the first by a long chalk …. Capo’s around the world have hit 100K miles since the late 2000’s. One in Italy did 125K+ and one in the USA 135k+ and there are others most definitely. But the number is low and I’m proud that my Capo and I have joined this small band of owners that have proved the reliability and longevity of our wonderful bikes. As I write this, the Capo now shows 102,698 miles and is all set for a bit of TLC after the ceaseless battering of rain it endured over the last three weeks. Along the way it gained a new MOT, a set of Anakee Wild tyres and a fresh pair of Brembo 07BB2035 brake pads for the rear caliper. In return it ran faultlessly, even in the face of rain the like of which I’ve not come across in many a  year.