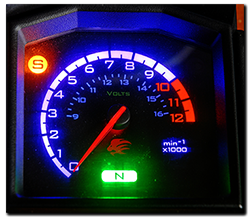 Way back when I started playing with the idea of using the dashboard tachometer as a voltmeter, I was aware I had one stumbling block …. I didn’t have a decent workbench power supply to calibrate the software/voltmeter against. In the end just using a battery and resistors the ball-park calibration wasn’t too bad, reading within a needles width of the correct voltage from 13 – 14v but it drifted terribly above and below this range.

Then in summer along came a gift from ABSL via Andy (Beasthonda) …. A very nice Thurlby 30V-2A dual power supply, which unfortunately had to languish in Oxford as it was too heavy to transport back by Capo! But patience is rewarded and it finally sits on the workbench, performing brilliantly and its first job has just been to calibrate the dashboard voltmeter once and for all. In the end it required a little code revision to get it just so, but it was worth it – now the voltmeter is accurate to a needles width over the full range of 9 – 16V. Happy Days! One more job to tick off the must-finish list. 😀

I really can’t say how much I appreciate Andy for thinking of me and ABSL for letting this power supply go to a complete stranger, I look forward to putting it to good use and hope that some of the tinkering on the workbench can make its way into other Caponords.

3,000 miles, six days, one exam and enough fog to last a lifetime ….. Yes, the last run of 2015 to the UK and back is over! The return bought with it oodles of goodies and an unwanted guest, the dreaded UK winter cold that then turns into bronchitis, oh what fun.
After getting back and between snuffling, shivering and coughing up gunk thick enough to glue shelves up with I managed to give the new Capo Rally-Raid frame a damn good de-grease and inspection. It all looks good and other than the usual wear and tear befitting a 12 year old part (in UK weather!) it’ll be a fine starting point for the bikes rebuild. It also gave me the opportunity to look at the differences between the standard and Rally-Raid frames. Does it really justify a new part number just because of a fresh run of serial numbers? Or is the difference more involved?

In fact it turns out the Raid frame is quite different. All the modifications are around the swing-arm pivot points and cross brace/suspension mount. Five reinforcement plates in all …. Making the difference in frame prices work out at roughly £50 per modification! Mind you, that’s chicken feed when compared to the list price – £3,193 (Std) / £3,440 (R-Raid)! 😯 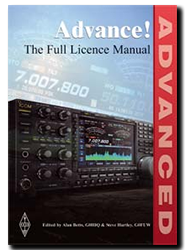 Oh and the exam ….. Well I took the Advanced (full) Amateur Radio Licence – the last of the three levels in the UK. Thankfully the head-cold wasn’t an issue, it would be a further 12hrs before that little puppy made itself known. So six months of preparation and study boiled down to two hours of pen-pushing on a Monday evening. FACT – did you know tummy-rumbling is catching, just like yawning … I know, I was there!  😳 Anyway, did I do all that studying  justice? Is it an early Christmas present or a can of Gold Label and a cry behind the bike sheds ……..

Unfortunately ‘ETV’ had gone, but to stick with the bike theme I chose my old Kawasaki ZRX1200 Eddie Lawson rep instead! Next stop – let’s see if the Italians will give me a reciprocal licence as well, it would be very kind of them! 😀