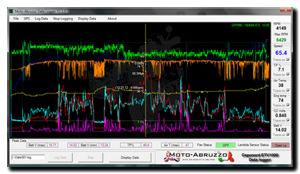 Wow what a whirlwind learning curve the last two days have been. Thanks to a Brain that (unusually) suffered the minimum of ‘Blue Screens’ and a patient wife who put up with all the muttering, mumbling and furtive running to and fro I now have a datalogger that is receiving info from the GPS and adding it to the log.

No doubt, chicken feed – a mere stroll in the park to any reading programmers …. me, I’ve taken out a lifelong subscription for Anadin! So, deep breath, sink a beer and pencil out the next step ……. I’m starting to get a liking for this digital-crochet lark!

I’ll try and get a snippet of video to post up so you can see it working ….. or crashing, whatever it decides! 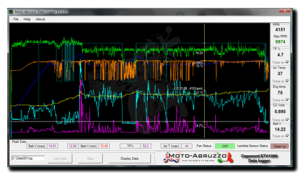 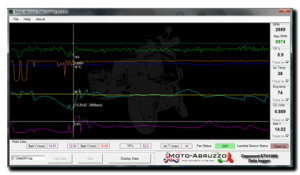 A new version of TuneECU has been released that may well be relevant to Caponord/Futura owners. If you have recently downloaded version 1.9.3 ……. remove it as it has a bug with regards to communication to/from the ECU. A new version 1.9.4 has been released (Monday 16/05/2011) that fixes this issue, although this is untested at the time of writing. 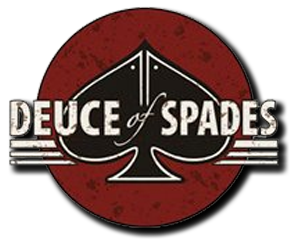 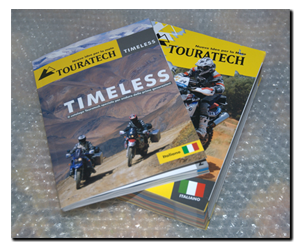 The new 2011 Touratech catalogue turned up yesterday – well both of them actually. The main phone-directory tome (all 1,219 pages) and the positively sylph like ‘Timeless’ catalogue for “Enduros of the first generation”…. no doubt sporting a nice line in aluminium false-teeth containers and enduro incontinence pants!

Well I thumbed through both … then thumbed again. Oh dear, it appears the Caponord no longer gets its own chapter. In fact its accessories are relegated to a chapter called ‘Travel Enduros’ …. us and the Triumph Tiger 955i. No longer worthy of our own pages we’ve shifted sideways to the Twilight Zone pending a place in the ‘Timeless’ catalogue of 2013 no doubt. Or are we destined to be wiped from the accessories catalogues for good? 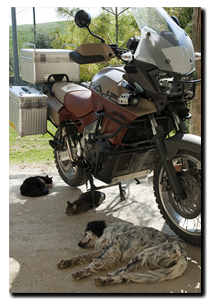 Some bikes of course become the darlings of the media, some the riding public – and some are  a hit with both. The Capo though, slipped through the net. Neither loved or hated by the press and frankly let down by Aprilia themselves by virtue of a poor dealer network, hardly the stuff that attracts hard earned dosh to swap sweaty palms. The public hardly got to see one, let alone try it … so the Capo came and went … and wasn’t missed with its passing. That, frankly, is tragic.

Oh well, mine still makes for a nice bit of shade ……