In a nutshell, which is best for the Caponord? The handbook is frankly very misleading ….

So is it a DOT4 or 5 or 5.1? And what’s the difference! Let’s start by unravelling the DOT numbers. Simply put, DOT 3, 4 & 5.1 are glycol based fluids and compatible with each other, they have different boiling points and viscosities (fluid thickness). DOT5 on the other hand is silicone based and NOT compatible with any of the other fluids.

So what are the differences between DOT 3/4 and 5.1 then, and which is best? Here is a

So in this instance it appears as though DOT5.1 is the way to go…….

The other aspect of brake fluid is the viscosity, the thickness of the fluid especially at low 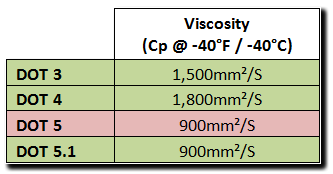 temperatures (measured at -40°F / -40°C). The following table shows the difference. DOT4 is slightly thicker than DOT3 while DOT5 & 5.1 are much thinner, in fact DOT5.1 pours very much like water!

DOT5.1 is used extensively in cold climates (as is the silicone DOT5) while DOT4 is fluid of choice for most production vehicles, especially motorcycles and performance cars. Incidentally, the silicone based DOT5 is used by the US military for all its vehicles since the mid 90’s and also by Harley Davidson.

Once again DOT5.1 seems to be brake fluid of choice for the dear Capo.

In fact I’ve been using DOT5.1 in the Rally-Raid for a couple of years now, it offers better, 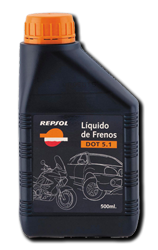 more consistent braking when the brakes (especially rear) are used heavily on downhill mountain hairpin roads. The downside? None that I’ve come across ….. although I do change fluids more frequently that specified in the workshop manual (2 years) – I change the clutch fluid every 6 months and brake fluids yearly to keep everything fresh and functioning at 100%.

There are other fluids you might want to consider, so called ‘racing fluids’. They are marketed as DOT4 due to viscosity, but have a higher (300°C+) dry boiling point. The ones I’ve seen are rated for road use, but frankly the very high cost doesn’t justify its use.

Bottom line? Consider using a high quality DOT5.1 fluid in the Caponord especially if you live in a cold climate with mountains!

Moto-Abruzzo implies nor accepts responsibility for work you carry out on your brake system. If in  doubt take your bike to an authorised and qualified Aprilia mechanic or seek manufactures advice.