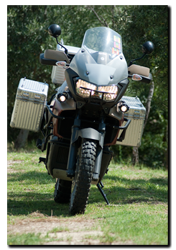 The brackets are designed for the 01-03 Caponord and as such require a little modification to suit the 04-on and Rally Raid ‘Mk2’ upper fairings. The mod requires a simple re-bending of the front mount on the bracket and a hole drilling in the plastic fairing (see pic. gallery). I used captive nuts in the fairing to secure the brackets and a rubber spacer to bridge the remaining gap.

The kits come with a comprehensive wiring loom, handlebar switch bracket (useless on the 28mm Rally Raid handlebars!) and relay – in each kit! From the start I’d decided not to use the switch, instead using the electronic ‘Autoswitch AS7’ to activate the lights. Sadly, the Autoswitch wasn’t available at the time of fitting, so I decided to fit the toggle switch as a temporary measure,  but also install the necessary wiring ready for the Autoswitch when it became available.

Finally I got an AS7 and set about fitting it. The Autoswitch is an ingenious device that looks for a voltage on a sensing wire, the voltage however must only be present for a set period of time … a kind of ‘window’. If the unit senses 12v for between 1.5 and 10 seconds, no more, no less, then it activates an output that can be used to switch the relay and turn on the lights. Providing the signal again for the appropriate period will turn the lights off. Turning the ignition off also does NOT reset the AS7 back to its ‘off’ state as I previously thought, instead it remains in either the ‘on’ or ‘off’ state it was in when the bike was switched off . 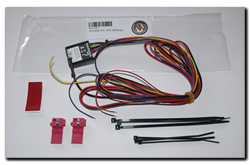 It comes with ample length leads (900mm) and the loom with the signal LED attached is almost 2m in length. Also included are a handful of cable ties, a double sided sticky pad to mount the switch and a couple of ‘scotch locks’ ….. swiftly thrown in the bin!

The unit itself is encapsulated and has no switches, pots or reset pin – it’s just a solid, vibration resistant and waterproof lump of electrical wizardry.

Wiring in the unit so it senses the ‘Pass’ light button did the trick. However a little more thought revealed a problem. If the High-beam switch is activated for the same duration, the fogs would switch on/off ….. and sometimes in life, it’s possible to switch the lights to high-beam only to have something come around the next bend that requires you too quickly switch back to low-beam. A potential problem then.

After a great deal more thought I decided to fit a 1N4001 diode into the triggered pass-light line. This would serve to separate the two activities – pass light/high-beam as far as the AS7 is concerned. Basically the diode blocks voltage from getting to the AS7 when the high-beam switch is used, but still allows it to sense the pass light switch. Now cycling the high/low beam (within 1.5-10 seconds) does not toggle the fog lights! The diode is a fiddle to fit into the left hand switch assy. but with a bit of patience ….. and small fingers!! I also ran a new wire down the switch assy. loom ready to connect to the AS7 sensing wire.

The relay sits behind the instrument panel and all the sensing and trigger wiring is in thin-wall automotive 32/0.20mm, 1mm2 (16.5A) while power wiring is in 28/0.30mm, 2mm2 (25A), soldered and heat-shrink wrapped at all joints. The main power feed to the relay is also fused close to the battery to protect the entire loom (20A waterproof in-line unit).

*As of 2014 these part numbers have been discontinued by Touratech.