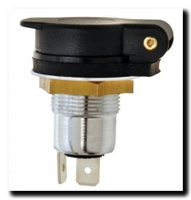 I recently fitted the BMW style DIN ISO 4165 power socket to the dashboard to make use of the hole already cut for the fog light switch (now redundant). It’s smaller and more reliable than the traditional car type socket and rated at 12V/5A that’s about 60w, given the build quality and decent connectors, I’d say this is a very conservative rating for this socket & I’ve since seen the exact same part being rated at 16A! 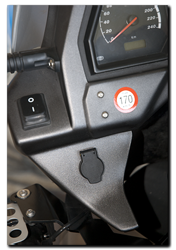 The hole in the panel was enlarged to 20mm diameter and the socket secured in place by its own nut and a dollop from a glue gun to act as a nut-lock. I wired the positive to the same terminal (orange wire) on the fuse block E connection. The only thing fed from this fuse is the power-out socket on the left hand side panel.

Using a fine blade screwdriver to release the locking tab, slide the orange wire/socket from the fuse block and solder the new wire to it, then slide it back into place until it clicks home again. The fuse is rated as standard by Aprilia at 15A and I decided to change it down to a 7.5A to cover either socket, that’s more than enough for the sort of accessories I’m likely to 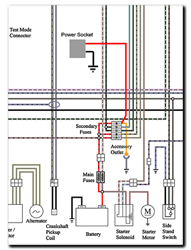 connect. The Earth was secured to the chassis and the whole thing reassembled.

The socket is widely available, mine came from Nippy Normans in the UK for £17 inc. VAT with UK shipping adding another £2 ( March 2012).