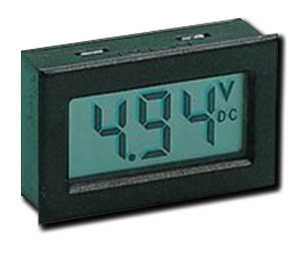 A few months ago I purchased a Datel DMS-20LCD-1-DCM-C 8-50v DC 3 digit voltmeter from Farnell UK, choosing the LCD against the red or blue LED as I figured that the LCD was nice and clear during daytime riding … and I ride mostly in the day! The red/blue LED units are hard to read in bright sunlight. Just a pity the LCD unit isn’t backlit for night-time. Whichever unit you get, don’t forget to order the bezel (DMS-BZL4-C) as well!

I fitted it into the right hand instrument fairing – loads of room here. The cut out was nice and easy using a dremel and it was wired to Fuse D (must be a switched supply) and the earth went straight to the subframe and being only a 2 wire unit makes this an breeze to install. To date it’s been totally reliable and accurate. 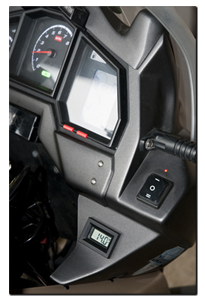 I’ve since been given a Datel DMS-20PC-1-DCM-B-C blue LED version to try. The first thing I noticed was the increased depth and the fact that it’s encapsulated, therefore waterproof, compared to the LCD one. It only took a few minutes to swap over 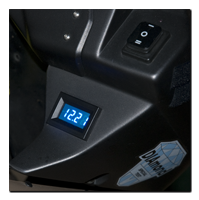 and the first surprise is how bright it is! In fact, having now put quite a few miles on in sunny weather, I can safely say that it’s readable in all but the brightest of direct sunshine. In the end, I’ve left it fitted ….. personally, I prefer the look of the LCD, but in reality the LED version is that little bit more practical.

The Datel did a fine job but ultimately was made redundent by the Sparkbright battery monitor and the in-built voltmeter in the tachometer that went live in January 2014. Unfortunately its removal would leave a nice big hole in the fairing, so I’ve decided to replace it with a digital ammeter that will show the current being fed to battery/loom from the rectifier regulator.