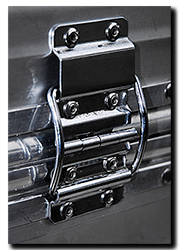 The day before the awful January weather hit, I managed to get a nice afternoon ride-out on the Capo. Stopping part way along for a coffee break, I paused for a moment to put helmet and gloves in the top-box – forgetting I had a bungee-cord still attached between the lid and side cases. With my mind wandering away on other things, I flicked the latches and began lifting with finger and thumb. In a heartbeat the cord snatched the lid out of my hand, slamming it hard against the hinge-stops bending the hinges and shearing two rivets. Oh well, after 10 years I guess it could do with a bit of TLC, now it definitely needs it!

A couple of weeks later, after the snow had finished having its wicked way, I managed to get around to doing a complete strip of the top-box in an uncomfortably cold and damp barn, first straightening the hinges then rebuilding it all with new 4mm stainless steel rivets instead of the feeble aluminium 3mm ones. While I had it stripped down I remembered that I’d had a little 3D printer idea regarding the top-box and now was the perfect time to do it. 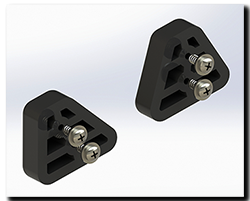 Something that’s always bugged me with the Hepco-Becker top-box is the lateral play in the mount which allows the box to be fitted off-center – around a half-inch or more (>12.5mm) either way. To take this slop out two plastic blocks modelled on the shape of the existing mount have been added using the same size self-tapping screws as on the main support. These blocks don’t take any load, that’s still handled 100% by the original support, their only job is to ensure the box lines up perfectly every time it’s refitted ….. no bumping, shuffling or tweaking it into place, and this most certainly pleases my mild OCD! 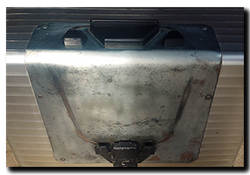 While doing all this, the bottom galvanised steel support plate was measured and a larger improved design drawn up. The original 1.5mm thick plate has too much flex for my liking (built to a budget) so the idea is to fit a slightly thicker 2mm stainless steel one for improved support, looks and weather resistance. After all this, the top-box should be good for another 10 years + …….as long as I don’t screw up the hinges again that is! 😀 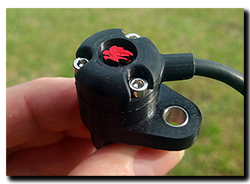 And finally, the January backlog of post and parcels are starting to trickle through and with the first batch came the 8mm OD stainless steel sleeves and a couple of Honeywell 1GP7001 speed sensors. So the sensor and case are now assembled and tested. Only the cable strain relief sleeve is missing before I can fit it permanently to the bike. Fingers crossed they’ll be in the next batch of post!