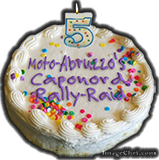 Today, the Capo and I have been together longer than any other bike I’ve owned. On a chilly but bright afternoon five years ago to the day, the Capo pulled up outside the house in Oxford and so began our unbreakable relationship. 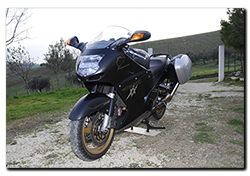 In October 2007 I’d ridden my Honda Blackbird over to Italy and whilst I enjoyed running around the mountains, it was increasingly obvious that it was a proverbial fish out of water in this terrain. I needed something like my old BMW R1150GS Adventure again …… and funds most definitely were NOT available for that kind of purchase!

No, the B-Bird had to go and whatever I bought would have to come out of that money. So I racked my feeble brain to try and come up with a viable alternative. It ended up between the Triumph Tiger 955i and the Aprilia Caponord ETV1000. I remembered seeing a Caponord when Motorcycle City collapsed and were rapidly flogging off stock at their Reading branch. One solitary silver Caponord had sat among a sea of discarded cardboard boxes and brochures as the place was stripped. I remember spending some time looking around it, wondering if I could get the £5K asking price together before the doors finally closed in a few hours time. It never happened of course, but the Caponord left a good impression …. I liked it. So I started searching, second-hand prices certainly seemed favourable and throughout the winter of 2007/08 I kept looking.

Meanwhile, I’d come across a post on an obscure motorcycle forum where someone mentioned that they had a ‘Rally-Raid’ version for sale. The thread was several months old and no responses had been posted – I’d give it a go I decided. So I registered and sent the guy a message and waited ………

Photographs emailed to me by the seller in January 2008

A few days later a reply email arrived. The long and the short of it was that yes, the bike was still for sale. currently it resided in Lyon (South France), was UK registered and had covered less than 1,800 miles and no extras or accessories had been added since it was purchased in Lincoln. Only the front fork recall had been done at the 600 miles shake-down service, then it was shipped out of the UK.

Photographs were sent (above) and a deal was struck. I’d ride the B-Bird back to the UK and the Caponord would be delivered about a week later. In the end, everything went like clockwork. On the 20th February 2008, a Wednesday afternoon, the deal was done. The next morning the Insurance, MOT and road tax were sorted and 12 hours later we were winging our way back to Italy through a nippy (-12c) Switzerland.

And so it’s now 5 years on. One sidestand switch, one Sagem coil, a set of front wheel bearings and 65K more on the clock since the journey started. A few shiny trinkets and several practical upgrades make sure it stays as reliable and enjoyable now as it has always been. But has it been worthwhile?

As the dog on the telly says – oh yes! Overall the Caponord has been as reliable, if not more-so than most other bikes I’ve owned. It’s a wonderfully agile mountain goat on the twisty  Gran Sasso mountain play ground and a supremely comfortable and quick workhorse on the 24hr mad-dash pan-European jaunts back home. Certain things are starting to show their age, handle bar grip rubbers and saddles that will need  recovering within the year – but the overall finish is still good and the stainless fasteners and alloy frame still twinkle in the sun.

On the 5th September the Capo will have its 10th birthday ( of registration) to celebrate and maybe a surprise or two as well! 😉

When I got back from the UK just after Christmas I set about installing the new Eclipse-8 battery monitor on the Capo. You may remember from a previous post that I fitted a 5mm LED battery monitor from Sparkbright a few month ago and loved it (previous post here). In December Andrew very kindly sent me an Eclipse-8 as a sample so I could evaluate it – thanks again Andrew!

What’s the difference between them? Well firstly, it’s only available as an 8mm or 10mm unit, no 5mm version as yet. Secondly – and this is the kicker – it’s also auto-dimming, changing it’s brightness depending on the prevailing light conditions, without using a separate photo-sensor to do it. Here’s a Sparkbright video of it in action.

So does it work? Short answer – yes, VERY well! I installed it in the same place I’d had the 5mm unit, just drilling the hole a little bigger to accommodate it. The Eclipse-8 has the circuit board attached directly to the LED, so only two wires and no circuit board in the loom to find a home for. The board is very compact and once the LED is inserted into the mounting clip, it is hardly visible. The length of wire supplied was ample to attach to the battery and earth points I chose in the bikes wiring.

The Caponord was bolted back together and fired up, the LED quickly changing from orange to green as the rec/reg did its thing and the voltage rose in the loom. In the strong daylight of the barn the LED glowed brightly, but put a hand over it and it very quickly dropped its output in response. All well and good, but would it be effective when put to use in the real world?

Well I’ve covered about 700 miles through January and early February in all weathers and lighting conditions and the Eclipse-8 has certainly lived up to my expectations. For example, here along the Adriatic, the A14 Autostrada weaves its way along the cost through numerous dimly lit tunnels. Jumping from bright sunlight to twilight and back gives the unit a good workout and each and every time it switches very rapidly – I’m guessing in a few milliseconds, but certainly fast. At night-time the unit operates primarily at it lowest output and is never distracting, sometimes increasing in  brightness as I pass under a sequence of street lamps just to let me know it’s still doing its thing!

So are there any downsides? Yes, but not as a result of anything done by Sparkbright. 8mm LED clips it seems are only available in convex and not concave style. Great for increasing the angle of visibility ( not important from the saddle) but also increasing the susceptibility of the LED to being ‘washed-out’ by direct sunlight and becoming difficult to see. As it is, there is a simple partial fix. Drop the LED further down the clip and glue it in place. I dropped the LED so its top was flush with the clip – a couple of millimetres I guess and this has made a world of difference. Now only the most direct sunlight affects readability and I can live with that!

Bottom line, the Eclipse-8 is a simple all-weather battery monitor for day/night use on a motorcycle – no more, no less. And it is doing the job perfectly.

Other than my initial purchase of the 5mm unit and sample Eclipse-8 supplied by Sparkbright, I have no affiliation to them. I’m simply offering my own review of products I believe to be useful and cost effective. It’s my unbiased opinion, if you buy one and don’t like it – tough. Don’t come running to me! Is that a disclaimer?