The Capo charging system isn’t the most complex, but can be a little troublesome. It comprises a permanent-magnet alternator (470W) feeding a rectifier/regulator via 3 wires (>60v AC@4,000 rpm), which in turn provides DC power to the bike via 2 live (red to red/black) wires and 2 Earth (green to red/blue) wires. The connectors between the alternator and rectifier/regulator are the most common problem area, overheating and melting, also the rec/reg itself is an ‘old’ technology shunt type and as such runs VERY hot. Voltage output is also rather strange, being approx. 13.8v at idle dropping to 13-13.3v at 4K rpm.

Alternator (more detailed alernator info HERE)
Very simple to test with a basic ohm/volt meter. First check the impedance between each of the yellow wires, the manual states 0.1-1Ω ….. mine measured 0.4Ω between them all. Next, check the output voltage with the engine at 4,000 rpm. An output greater than 60v AC is acceptable (manual says DC – IT IS WRONG!) …. mine measured approx. 70.5v AC each. The specification is VERY loose compared to some manufacturers, but in the end if it meets/exceeds it, it’s good to go as far as Aprilia are concerned.

Issues
Faults that have shown up are a complete failure of the system through connector or rec/reg meltdown or – worse still, an over-voltage (>15v) in the wiring loom. This can and does damage the instrument panel and usually fries the battery to boot. Loom wiring is also tightly bound and has been known to rub through or overheat with disastrous results!

The following graph shows the rapid increase in temperature of the standard shunt unit from start-up. All rectifier/regulators have a ‘de-rated’ operational load based on temperature … when cold the original shunt unit is rated at 35A, when operating at 80c however, this is down to <15A. 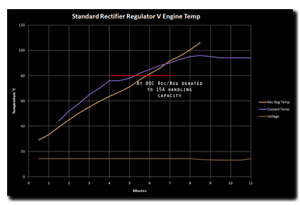 It seems logical then, that whatever unit is fitted, cooling is of primary concern to maintain unit performance.

Upgrade
In recent months (2010) it’s come to light that MOSFET rec/regs are an ideal replacement for the Capo. They run cooler, are more efficient and available in abundance on the Internet/Ebay as they’re used on a wide range of bikes. The two units of interest are the Shindengen FH008 (35A) and FH012 (50A). The FH008 is available in two ‘flavours’, one with ‘pig tail’ leads and one with sockets, the FH012 unit is socketed only. Also bear in mind that the ONLY unit that will fit in the original location is the ‘pig tail’ FH008 – anything with sockets is physically to tall. I chose however, to use an FH012AA for it’s increased capacity and the fact that whatever unit I fitted would be mounted for better air flow. 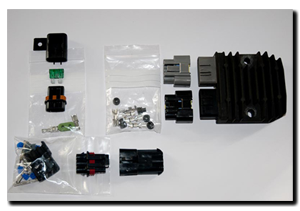 Mounting
While the parts were on order, the mounting plate in 1.5mm aluminium and a 55mm support tower were made and fitted and the bike ridden around with the rec/reg in place to make sure that it didn’t foul anything and that the plate was up to the job! 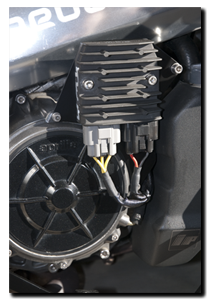 Everything worked out fine, so the plate was refined and sent for powder coating.

Wiring
Thin-wall 3mm/33A rated automotive cable (yellow) was used to make up the new loom from the alternator to the rectifier and 4mm/39A rated cable for the DC (red/Black) loom from the rectifier to the battery. They are also sheathed in heat and abrasion resistant sleeving for extra protection. All terminals are crimped, soldered and covered with heat-shrink – all in waterproof connectors! Not being able to find an automotive wiring supplier here in Italy, all cables came from the UK – here.

Upgrade conclusion
Once rewired the Capo produced a healthy 14.2v at idle AND at 4K rpm and maintained 13.8v (at idle) with ALL lights, heated grips, accessories and cooling fan operational. I figure the upgrade ticked all the right boxes!

Here’s a graph showing the relationship between the heat build-up of both old and new units while the bike is stationary. The FH012AA unit heats up much less and is probably heated more by radiated and conducted engine heat than is generated internally. In fact, when out and about on all types of road from forest trail to motorway, the FH012AA operated at a consistent 42-43°C. 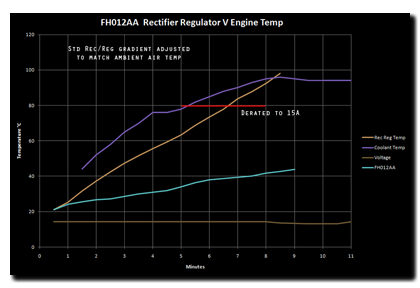 Here are some additional images and the specification sheet for the FH012AA unit.