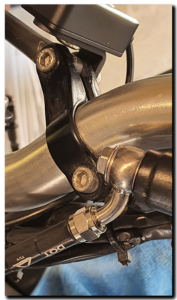 I managed to get a couple more Capo jobs out of the way recently. Firstly, replacing the clutch line for a nice new Venhill version to match the shiny ones on the front brakes. The hose required uses:

It fitted perfectly, and while I was changing the line I also changed the banjo bolts and bleed screw for matching stainless steel units to complete the look. I have to admit, these are not cheap lines …. but I love the fit and flexibility with interchangeable ends. So for that I’m willing to overlook the extra hit on the wallet! 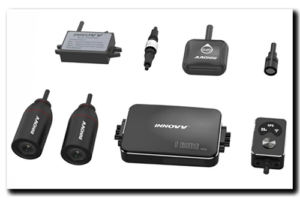 Secondly, I bit the bullet on an Innovv K3 dual camera system. As some may remember, I’ve previously tried the original K1 and the much improved K2. Unfortunately, the K1 DVR unit died after 12 months and the K2 turned itself into a brick with a failed firmware update. To be fair to the K2, it was leagues ahead of the K1 and (when it worked) was a truly fit-and-forget system. What went wrong I have no idea, I followed the update process to the letter and even had a few email exchanges with Rock Liu from Innovv, but they dried up when it looked like the unit was unrecoverable. I was lucky enough that the K1 and K2 had been supplied FOC, so nothing lost. This time however, it’s my own outlay. It’ll either be ‘third time lucky’ or ‘a fool and his money are soon parted’!

Certainly my first impressions on opening the box are:

Looking through the technical specification, it looks like the main upgrades over the K2 are:

Installation was of course, very similar to the K2. The power module connects directly to the battery positive and negative terminals and the yellow trigger wire went to the loom I still had in place that tapped into the rear lights/brake lights. As soon as the side/head lights are turned on there is a 10 second delay before the unit begins recording and when switched off, a 25 second delay before powering down the unit. The front camera comes with a 2m lead which is fine, but the rear has a 1.5m lead which for the Capo is way overkill. I only needed about 0.4m and hiding the rest away was a real pain.

To install the cameras I used two 15mm rubber lined stainless steel ‘P’ clips – the front one on the Aprilia headlight guard and the rear on the pannier frame. The included mounting kit parts fitted to these clamps just fine and it only took a couple of minutes to get a nice neat install and great picture being recorded! Oh but one bit of advice ….. the supplied screws don’t use any washers, so once happy with the install, I went back and put a dab of thread-lock on all the screws just to be safe.