Let me start by saying they were cheap and I was curious ….. They were cheap for a reason though. They were most definitely NOT the magnesium cam covers in the EBay advert photographs! Oh well, they were physically fine, just scratched and one had a little surface corrosion under the paint.

So I had a brainwave, take these and the spare pair of Caponord cam covers to be powder coated. Use them as test pieces before letting someone loose on more important bits of the Capo. A lovely idea in principle, but around here powder coaters are thin on the ground, so Google was my best friend for a few minutes. Initially I looked at the ones with websites and they were either too industrial or too far away. Then I looked at one about 20 minutes from where I work. No website, but good reviews from other social media and some examples of his work – so I made contact. 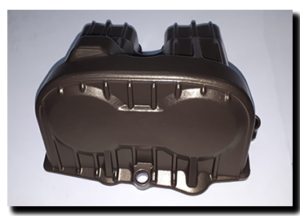 And here is the outcome of that meeting …. One of four cam covers in ‘Anodic Bronze’, with a one week turnaround for £60 inclusive. I’m happy with that. I think it’s fair to say that Sam is a man of few words, who’s happy squirrelled away in a modern workshop out in the sticks, doing what he enjoys. Communications were excellent and he did a great job in the time frame quoted, at a reasonable price. Next then a Caponord oil tank, passenger footpeg hangers and some crash-bars and various brackets – In RAL9011 Graphite Black.