What is it they say about best laid plans? I wrote this piece on the 3rd September ready to post it on the 5th. Unfortunately, a complete loss of phone and internet in our area for three days screwed this plan up nicely. Anyway better late than never I guess …. here it is. 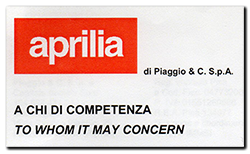 The ‘Certificate of Origin’ for my Rally-Raid says that it was manufactured in 2002. This is quite odd as every removable plastic part with a date on it has a moulded stamp dated sometime in early 2003. So when are our bikes actually ‘manufactured’? Is it the date the frame was made and given a chassis number or when a completed bike roles off the production line? My guess is the former.

I suppose I’ll never really know the answer, so I decided to give it a birthday like the Queen, you know, the ceremonial one rather than the official one. As the date of first registration is known and on the V5 (Registration Document), I thought this was the most appropriate date to use.

So that makes today, the 5th of September 2013 the 10th Birthday of my Rally-Raid!

Exactly how do you give a 250Kg motorbike the bumps! At least it’s a fine excuse for jelly, ice cream and lashings and lashings of beer! And afterwards ……. presents!!!!!! 😀