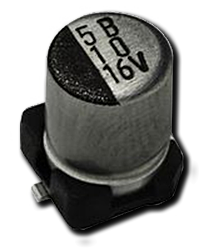 Yes, today I’m dishing the dirt on the number one bad-boy component on the Caponord and Futura dashboard. Or more to the point, why this sad little part earns this unwanted reputation! What is it? Well it’s a rather innocuous SMD radial electrolytic capacitor rated at 16V 47µF.

Over the past couple of years, I’d say that 70% of contacts via the website have involved this component in one way or another …. and that percentage is steadily increasing! Why? Simply because of the constant and unstoppable tick-tock passage of time. Unlike most electronic components, electrolytic capacitors have a given life span based firmly on operating temperature and duration. What does it do? In a nutshell, it smooths out the 5V DC power rail … without it the rail contains a nasty AC component and that really upsets the microcontroller!

First I want to look at the symptoms this little guy causes when it begins to shuffle off to the electronic afterlife:

Of course, to be 100% sure, we have to get down to the circuit board and identify the component first: 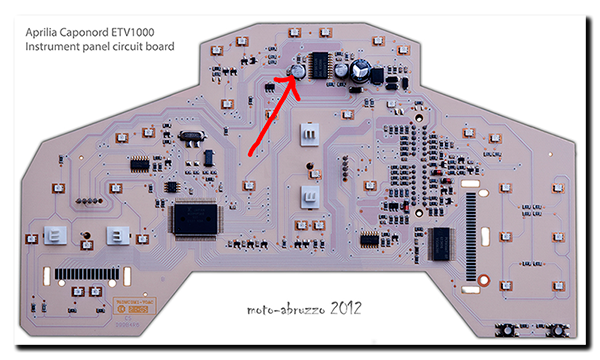 So there it is, just to the left of the voltage regulator chip. Now I’m sure the eagle-eyed amongst you will have noticed that there is a similar (in fact identical) component to the right of the regulator …… why is only the one on the left a problem then?

Well the dashboard has two regulators in the one package, supplying two independent 5V power rails. One is powered permanently from the minute a battery is installed in the bike, the other only operates when the ignition is switched on. And there lies the answer to the question …… lets punch in some numbers. For the sake of argument, we’ve got a Capo that has done 5,000 miles in a year and averaged 50mph.

And there is the bottom line. After 10 – 16 years on the bike, the left hand capacitor is simply reaching the end of its working life long before its companion on the other power rail, and with each passing year more are failing …. It’s not a case of ‘if’ folks, it’s a simple matter of when!

Replacement is straight forward and has been done by quite a few owners over the years, but like most things, it requires a certain level of skill and experience along with the right tools for the job ….. without these, there is a very real possibility of damaging the tracks or adjacent components and making the board worse than when you started. You have been warned!

2 Replies to “No1 component that fails on a dashboard…..”