Deep in the bowels of the Motrag box of goodies are a pair of indicators for an Aprilia Mana – identical body, lens and bulb as used on the Rally-Raid and standard capo 04-onward, but with a greatly reduced stalk length.

With only very minor modification, these can replace the existing long-stalk indicators on the rear of the Capo, unfortunately they are too short to replace the fronts as well. The mod is so subtle the old indicators can be refitted no problem. When fitted the indicators have much greater clearance from the pannier latches, which makes removal/refitting the pannier easier and they are now well within the width of the pannier rail –  so dropping the bike (not a recommended pastime!) should greatly reduce the chance of a broken rear indicator.

Simply pop off the lens (one screw), prise out the reflector/bulb assembly and disconnect the two wires. Now remove the screw/nut/washer holding the stalk to the mudguard and ease it away while wiggling the wires out. Now the first of two minor modifications are required.

The indicators are held in place by the screw/nut/washer AND a tab that hooks behind the mudguard itself, except on the Mana stalk the tab is too narrow. A quick bit of work with a Dremel soon has that sorted (open gap to approx. 4.5mm). Now the second modification is to extend the slot in the mudguard ( extra 5mm) where the screw passes through. This mod does NOT affect refitting the original indicator as the footprint of the stalk is identical in both cases, so the slot extension is covered by the base of the indicator irrespective of which one is fitted. 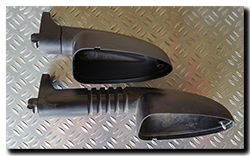 Once sorted, simply reverse the removal stages – slot in the new stalk and fasten up the screw, nut and washer. Re-thread the two wires back down the stalk and attach to the connectors on the reflector, then screw the lens back in place. Now repeat on the other side, then bask in the warm glow of a job well done, in fact a cold beer goes down a treat about now ….. Ahhhh Mana from Heaven! 😀

NOTE: The indicator bodies are LEFT and RIGHT handed, look at the recess between body and lens – this is the drain and needs to be on the lower edge. I’m not saying I put them on the wrong way round or anything so numpty, perish the thought! 😳