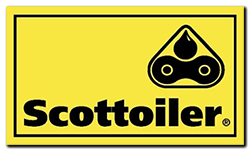 Yes it was 12 years ago I bought the Scottoiler ‘Touring’ package and a twin-feeder as an upgrade. It was all fitted to my lovely Kawasaki ZRX1200, then a year later swapped to a Triumph Trophy 1200 where it did several years sterling service. Later it spent a couple of years on the shelf before being dusted off and fitted to a Blackbird. Then in 2008 it went onto the Caponord where it worked faultlessly until earlier this year.

I noticed a steady decline in the amount of oil being fed to the chain and adjusting the RMV (Reservoir Metering Valve) made no difference. The fault turned out to be a clogged  twin-feed. I tried blowing it out and using vacuum to suck out the blockage, but nothing worked. In the end I bought a new one and cut the old one open to try and find the culprit. It turns out that inside lives a piece of foam that acts like a reservoir and this had broken down into mush and was blocking every passageway.

The new one only took a few minutes to replace and oil flow was restored. I’ve worked out that this kit has well over 220,000 miles under its belt and that equates to a purchase/running cost of about £1.65 per 1,000 miles. In truth though it is starting to show its age, the flow rate seems to be less adjustable that it once was which I’m putting down to the rubber diaphragm hardening with time. Before winter I’ll replace the RMV completely (about £42) and hope this one lasts another 12 years!