The modified HAAS coils have been on now for just over six months and 12,000 miles and everything is ticking along just fine. Even so, the Capo needs a few treats every now and again, so I thought a nice new set of HT leads might complement the new(ish!) coils. Besides, the old OEM HT leads have been on the bike for 14 years!

So a couple of weeks ago I placed an order with Race Spec Performance (UK) for a set of Magnecor KV85 (Part No: 2530) HT leads. These are made on an order-by-order basis and this means a bit of a wait if lots of orders are flooding in as the riding season gets underway. They make it very clear that the wait could be three to four weeks. I wasn’t in a rush, the wait would be fine. So I was pleasantly surprised when they rocked up on the doorstep in just over two weeks – excellent stuff!

Now these leads are designed to fit on the OEM Sagem/JCI coils but also fitted my modified HAAS coils with no issues at all. Well maybe one ……. the rubber boot is such a damn good fit it doesn’t allow the air out as the lead is pushed into place – so the trapped air just builds up pressure as the volume decreases. Then when you let go it oh-so gently pushes the lead back off again! The trick is to get it seated properly then slide something blunt up under the boot until hearing a ‘psstttt’ as the trapped air escapes …… NOW the lead is on securely! 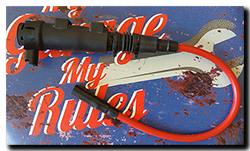 Overall the caps are shorter than the OEM angled ones and even with 8.5mm diameter cables the fit and bend of the supple cables is perfect in all four mounting locations. Overall length is fine allowing cables to be routed comfortably without trying to lose excess cable or bend cables in an unreasonably tight radius. And of course, now the engine looks way more powerful with these bright red babies in place!

Would I buy them again? Yes. I’ll definitely pop a set on the other Raid, with one proviso – I’ll skip the international shipping as it’s a bit steep (£16 versus £4.99 shipped within the UK). Otherwise at £50.99 I’m happy enough given the quality of the product, excellent fit and 10 year limited warranty. So lets start clocking up the mileage and how well they last! 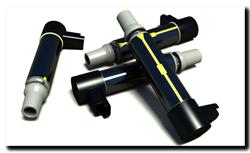 Yes I put my hand up …… it was all my own fault! I just had to go and mention the Sagem coils in the last post. A real tweak on the nose of Murphy’s Law if ever there was one!

The other day I had to pop along to the shops and being a lovely warm sunny day it was definitely a job for the Capo, besides I had the Innovv K1 camera system fitted and this would be an ideal time to try it out. The first sign that something was amiss with the Capo was a slight hesitation, a stumble just off idle. That and a slight misfire occasionally – more a sensation through the seat than anything else. 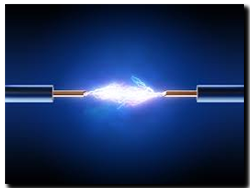 Once back in the barn I had a look at the Innovv DV recorder – No stored video, nothing! What the hell? Then the penny dropped ….. The Innovv worked fine with the engine off, but fire it up and it had a complete meltdown and either turned off or froze. It looks like some serious interference at work. With the seats off, I realised there was a faint intermittent ‘tick, tick, tick’ to be heard over the exhausts from the battery/coil area but I couldn’t see anything. So I waited until dusk and tried again – bingo! – A nice intermittent flash of HT from a rear coil to the subframe. That’ll most certainly mess things up quite nicely.

With one Sagem definitely now duff I decided to retire both remaining ones. After all, 111,000 miles isn’t too shabby! To keep all coils the same I thought I’d order three TechAutos – two as replacements to match the two already installed and one as a spare, just in case. So back indoors, fire up Flea-Bay and almost fall off my chair when I see what TechAutos are up to! Here’s a screenshot of their latest pricing for 3x coils. Hmmm……

…… So I fired off an email asking about availability and real-world prices – and after four days, never heard back from them. I decided that with outstanding customers service such as that, I would go elsewhere and buy Renault V6 coils! In fact for the last realistic price I recall seeing for three TechAutos coils I can buy six Renault coils. Now the old girl will get a nice new full set of coils and HT leads plus a new set of Iridium plugs ….. hopefully that’ll keep her happy for a few thousand miles! 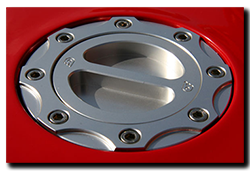 Yesterday was a great day, warm and a smooth running Capo to zip about on …… not so today, no siree Bob. Started her up this morning and that dreaded little EFI light started flashing away. Front coil #1 (code 33) had shuffled off to the great coil playground in the sky.

Before swapping it out, I plugged TuneECU in to get a screenshot of the dwell – reading 0.420 in the picture – definitely dead as a Dodo. Not to worry though, a spare was on the

shelf and an hour later the job was well and truly jobbed. Just two things to mention really ….. one, changing that rubber sleeve is a right pain in the proverbial and two, getting the HT lead onto the Amrish coils is even harder! Note to self …. make sure the next spare coil on the shelf is already fitted into a sleeve and has a HT lead attached, that’ll save at least 15 minutes and a book full of swear words! So after 92,413Km the second Sagem coil has been replaced, the first went a couple of years ago, so will the last two make it to the big 100K Km?

Here’s a graphic I keep (laminated) on top of the airbox lid – it just makes it easier to locate the right coil without consulting the manuals. Click for a bigger version. 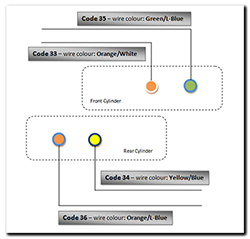 Well I have to say it’s been quite a stressful few weeks ….. a Capo coil failed just before I left for the UK, but as it fed a side-sparkplug the bike ran OK and so it had to languish at the airport while I wandered off to rainier latitudes in search of parts and a little work. The stay in the UK was pretty uneventful, quite nice actually, except for a Sunday morning psychopath using a 40 ton articulated lorry as weapon. Very unnerving.

Time flew by as it always does and I’m soon back at Pescara airport uncovering the Capo in the dark, will it start? Of course it does bless it, and we enjoy a nice moonlit ride home. Jeez the Capo feels BIG after riding a Honda Hornet 600 for a couple of weeks!

The next morning a new coil was fitted (more here) and shortly after, while basking in the warm glow of a job well done, my computer decides to crash! Total meltdown … it’s thrown its metaphorical electronic toys out of the pram, 360Gb of digital mush. Bugger!!! 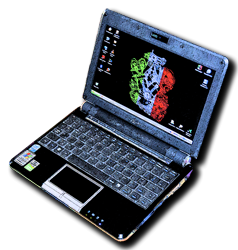 So now I’m relegated to a teeny-weeny 9″ screen on the notebook and a overwhelming desire get more than one podgy finger at a time over the miniature keyboard. As a part of the Capo’s tool kit it’s the business, as a day-to-day work tool it sucks big time …… sorry Asus.

Now my heart is well and truly sinking as I take stock of all the stuff that’s possibly lost.

It’s official …. Moto-Abruzzo has been bitten by the infamous

Caponord coil failure syndrome. It was a lovely day so a spin round the block was on the cards, the Capo fired up sweet enough before starting to flash the dreaded ‘EFI‘ warning lamp. Oh deary me.

Turned out to be a rear coil (Code 36) that had died, no worries I thought, I’ve got a couple of spares on the shelf – although of unknown history. Turns out one was toast and the other intermittent, so both are useless.

This morning I adapted the mighty Moto-Logger to display the coil ‘Dwell’ data in real-time so I could have a look at the intermittent coil in operation. Interesting – but wholly depressing on a nice sunny day when I’d rather be riding the damn thing. Rather strangely, the coil began to work OK once it got hot …. very peculiar! Anyway, new coils are on order so it won’t be long.