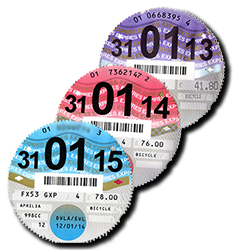 Let me tell you a little story …. Back in 06 I bought an ST1300 and a couple of weeks later while out with students, I got pulled over by Mr Grumpy the police officer with a charisma bypass. It seemed that his ANPR (Automatic Number Plate Recognition) had flagged my bike as not having a valid tax disk. So I pointed it out to him – nice and readable on the front fork leg. He wasn’t interested because “The computer says ………”

The nice lady at the DVLA office (now closed) in Oxford verified it was genuine and that it was all just a silly computer error – that cost me time and fuel to go and sort out, not to mention the embarrassment of being pulled over in front of paying students!

Now the same government will be doing away with the printed tax disk in October, no doubt sucking up the extra millions it saves on printing and distribution. Oh of course we’ll get a receipt when we pay, one that we now have to print out ourselves at our own expense and presumably carry around with us just in case we come across ANPR wielding cyber-cop again …. and would he believe you anyway, because “The computer says ……..”

And let’s not forget one thing, this is the very same government department that shoved its collective fingers in its ears and hummed the la-la song in total denial that they were losing the motorcycle entitlement off licenses being returned for address changes etc. Only when this involved some folks with impeccable and verifiable backgrounds (police/paramedic & motorcycle instructors) were they shoved far enough into a corner to have to admit (begrudgingly) that maybe, possibly they were in the wrong …. but “The computer says …….”

So next time you get pulled by an ANPR wielding digital-do-gooder it’s you against the creaky-leaky government database and you know who’s side Robocop is on.