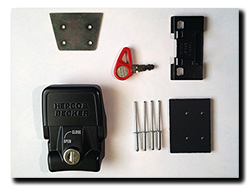 Just got around to fixing my ‘breakdown’ – the new latch (Hepco Becker Part No: 700101 00 01) arrived today and after a hearty breakfast I set about changing out the broken one. The kit is a ‘universal’ one for all HB panniers and so a whole bunch of the bits supplied are immediately resigned to the waste bin …….. I’d have been happier with just the latch and a few quid off to be honest!

So out with the foam liner, off with the bottle rack and remove the five countersunk

bolts/washers/nuts and pull the aluminium box away from the frame. Next, drill the heads off the four solid rivets using a drill bit approx 6mm or slightly larger. Then lever the old latch away and separate it from the spacer. Job done …… now for the rebuild!

The latch as supplied comes with 3mm rivets and is drilled to suit, unfortunately the Alu Exclusive luggage was  put together with 4mm solid rivets because of clearance between frame and case. No worries, down to the hardware store and a bag of 4mm Dia 10mm long stainless rivets are on hand to do the business. Once in, the heads are ground down a smidgen with the Dremel to achieve the same clearance without compromising shear strength.

Rebuild is a straight reversal of strip-down, but  everything gets a thorough clean, grease and general pampering to make it feel good. The pannier is now solid once again and if I get 13 years out of this lock and rivets like the last set, I’ll be a happy bunny.

Thanks go to Griff at hepco-and-becker-luggage.co.uk (web face of moto bins) who chased up key numbers with me and made sure the latch was on the doorstep in Oxford the next day – excellent service. 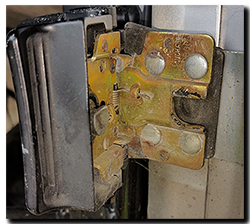 Removed the right pannier the other day while changing out the rear brake pads (makes life a bit easier!) but couldn’t get the latch to close properly when refitting it …… turns out the latch has broken on one side of the pivot. It looks like it’s just fatigue over the years of bouncing (over) loaded boxes across the continent. So a new latch (Hepco Becker part no: 700.101.00.01) has been ordered from http://www.hepco-and-becker-luggage.co.uk a spin-off company of Moto-Bins. Cost should be £22.80 but they’re knocking 15% off at the moment, so it cost £19.38 delivered. I can live with that!

The latch comes complete with new lock, keys and pop-rivets to fit it. However the original is installed with solid rivets, so this is what I’ll use as well. This of course means stripping the liner out and unbolting the aluminium box from the chrome/steel frame, but it’s only a 10-15 minute job and a good excuse to give everything a damn good clean and polish at the same time. 😀 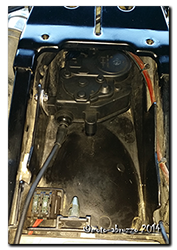