Crikey time flies. It seems an age since ACIM and all the stuff that happened before and after that great weekend, so I’ll start off the week before ACIM – the great cruise control saga. On the 3rd July TNT delivered the package to customs in Ciampino (Rome) Airport – a full week before ACIM, unfortunately it was from here on I became embroiled in a constant round of emails and phone calls in an effort to get the kit cleared to complete its journey. On the Thursday 10th (day before) ACIM it looked like I might be able to collect it from the local TNT depot on the way up …. ‘call us after 9am’ I did ….. Customs still had issues, call again on Monday. So that was that, no kit fitted or available to show. Frankly I was fed up to the back teeth with the whole thing and looked forward to a stress free weekend to unwind!

What a great weekend, new faces, names to faces and names who’s threads/posts I’ve read for years – a bit of hero worship going on here! A 560 mile round trip that shook the Capo down nicely for the big trip a few days later – with a very enjoyable spirited ride back to the hotel on Saturday evening with two Capo riders across some stunning scenery……we had a blast, thanks guys!

Other than that, I’ll let Jan fill you in with more details and pics from her website – Janet’s Edublog and end by saying a big thanks to the organisers for a fantastic weekend and we look forward to meeting up with you all again soon. 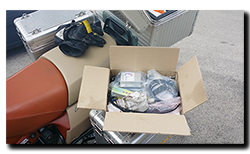 After ACIM, with the Capo tucked up in the barn on Sunday night, I could focus back on the cruise control and my impending trip. Time was short … too short. Either the cruise control had to be cleared by customs on Monday/Tuesday or sent back to Australia – it was that simple. If the window of opportunity was missed, then frankly the cruise control was a waste of time, effort and money as I’d have to travel and hope my wrist held out. Not only that but I’d be away for the next 14 days!

In the end, at 10am on Tuesday, I stood at the TNT depot (Chieti Scallo) and marvelled as the sun glinted off the packing tape of a big brown box full of goodies! We whizzed home in double-time and the spannering started in earnest ……

….. by Wednesday afternoon the kit was fitted, calibrated and given its first brief test – and worked like a charm! Now I was out of time, bags were packed, Capo loaded and refuelled and at midnight I dropped onto the A14 North and the cruise was engaged for the first mile of many – and it performed faultlessly throughout. 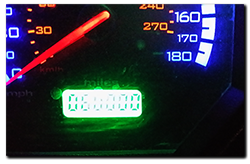 The next 25hrs took me door-to-door and the Capo gained another 1,350 miles under its belt. The cruise had been engaged for well over a 1,000 of those miles (night-time motorways) and the odometer slid over to 60,000 miles on the M25/M40 slip road, a half hour short of Oxford. The next 13 days were a blur of activity with the Capo grabbing an MOT somewhere along the way ….. And before I knew it, the Capo and I were heading back to Dover again with panniers groaning with tea-bags, cheddar cheese and bacon!

The return run was a real mix of (summer?) weather, dense fog in France, rain and sleet in

As the sidestand took the weight from my aching knees and I eventually convinced my right leg to ease its way over the saddle for the last time, I saw Jan in the red glow of the tail-light all warm smile and a cold beer! Now that’s a way to be welcomed home …….. 😀