Waiting at the Post Office today were a couple of type-380 60 red LED tail/brake light bulbs to have a play with. I got these from Autobulbs.co.uk in preference to the 92 LED version that needs modifying to fit into the Caponord reflector/socket (thanks for the info Andy!).

To recap  on the conclusion of  ‘On the right wavelength? (Part 1)’ – In my opinion it would be unwise to fit WHITE LED tail/stop bulbs in the Capo UNLESS you first have definitive proof of the red light output and even then, there is the subject of the legality of fitting them in the first place!

What follows then is a laymans point-of-view of the alternative red LED bulbs after a fun-filled afternoon tinkering in the barn ……. 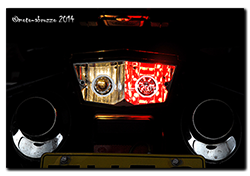 So ……. off with the lens cap, pop out a bulb and in with the new …. Easy to fit with no modification, they are certainly brighter than the standard 5w tail lights, while the brake lights are definitely on a par, if not a tad brighter than the standard 21w filament, most importantly the change in output when the brake is activated/deactivated is crisp and very obvious. Of course the one thing you notice electrically, is the wayyyyy lower drain on the battery when braking! Here’s a table comparing the power usage:-

One additional point I noted in favour of the LED’s is actually based on their construction …. the filament bulb relies heavily on the reflector/lens diffusion to spread the light because it only has one fairly focused source of illumination, whereas the LED has 60 independent sources that reflect and refract far better giving the appearance of a much brighter output from ALL of the lens, a more uniform glow if you will! 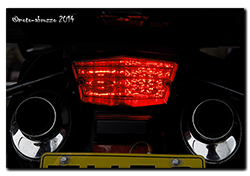 Oh and one thing I almost forgot to mention about the LED bulb is that all 60 LED’s are illuminated at all times, the activation of the brake light simply intensifies their output, rather than switching on/off additional LED’s as I’ve seen in some bulbs. I think this maintains a much more even and balanced spread of light.

Conclusion …. yes the RED bulbs work as well if not better than the incandescent and of course the power saving is incredible. How they perform when hot and after several hundred hours of use has to be seen. In the end though I do have to wonder about two things; the logic of selling white LED bulbs for use at the rear of a vehicle and the woefully outdated UK/EU legislation in use – for example, using a bulbs power consumption as a measure of its output is unbelievably outdated. Technological change is here and seemingly faster with each passing year, legislators need to move out of the 20th century if they have any hope of keeping pace.

Me? …… I’ll leave them in for a while, just for evaluation off-road you understand. 😉 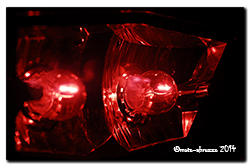