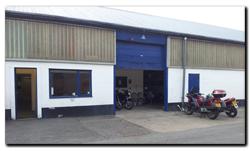 I’m finally back home for a rest. Oh, did I forget to say I was going back to blighty for a few weeks? Well it was three weeks of fog, frost, rain, sunshine and snow! To be fair, the last two weeks settled down to some semblance of normality after mid-morning. While I shivered and cursed the fog and way-to-fast traffic, Jan held the fort in Abruzzo. She did brilliantly and had a fine time in vastly better weather!

On this trip I was primarily tasked by AMI with training Alan, the new instructor. Alan has an impeccable riding CV, having served for many years in the London Motorcycle Paramedic unit and being responsible for rider training. Would he cope well though with the initial learner end of the spectrum?

Well on my last day I was proud as punch to present him with his first DSA qualification, the ‘Down-Trained’ certificate, which allows him to teach CBT (Compulsory Basic Training) and work with post-CBT learner 125cc riders. It’s just the first rung on the long ladder to DAS qualification as he well knows, but his determination, skill and knowledge have set a firm foundation on which to progress. Good luck Alan, your card was well earned and I hope to work with you later in the year, and thanks Jim for the work! 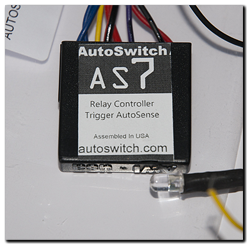 On a Capo note, I finally managed to bring back an AS7 Autoswitch for the fog lights. You can read more about fitting and operation here – it works brilliantly!

I also briefly met ‘Training Man’ and his partner (Paul & Anna) from the AF1 Aprilia forum at a local bike café. His Capo was the only bike in the car park – until our motley group of school bikes turned up! Nice to meet you, maybe see you at Bristol Italian Day next year …….

So it’s back home to nature running wild as spring sets in. Time then to refuel the strimmers, saws and tractor and get stuck in to sorting the land out ……. but first, one little ride out on the Capo, Jan won’t notice!