Not much content about the Capo in this post I’m afraid, it’s about the road its poor wheels have to traverse!

I must admit, I get upset at empty promises, I really do. Political worse than any. And frankly I feel we’ve had more empty promises come our way than most! The problem, is the road ….. it’s not ours. It belongs to the Comune (sort of parish council) and so it’s their responsibility to maintain it. Except they haven’t.

Over the past four years it has steadily got worse, the rain 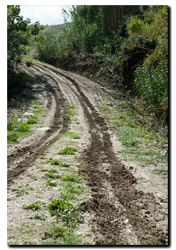 has washed the white stone topping into the valley, the tractors/trailers (and our Land Rover) have methodically dug the pot-holes and wheel ruts deep enough to leave an average car suspended by its axles.

The postman was the first to refuse to come down it in 2009. Since then the list has steadily grown long enough to fill a phone book. We have to drive out to meet any deliveries and hitch up the trailer for the bigger stuff and hope the Landy can haul it back through the winter quagmire. The lack of a warning sign at the end of the road does however provide us with a form of hillbilly entertainment – a trickle of vehicles in various stages of ‘stuck’, each being pushed/pulled, towed or just abandoned until a drier day. 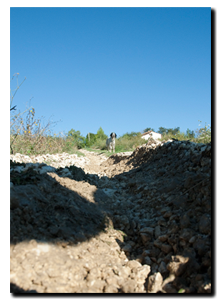 And so we started asking for repairs. We asked and asked, we photographed, we videoed, we wrote. We had a string of visits by the powers-that-be and we got nowhere. So through 2009-10 we slowly ramped up our little campaign – recorded delivery letters and more videos on an almost weekly basis.

Then at the beginning of 2011 we get told that our road will be done as soon as the weather improves. By June it was very improved, but still no sign of a little man with a digger. More phone calls and visits to the comune.

June gave way to July, then in early August a little man did indeed come along with a digger. For a week he widened and levelled the road, hell he even rolled the thing flat as a billiard table. He even dug up our water pipe, severed it and damaged the valve … then he went home.

At first glance his handiwork is an improvement (the road, not the water pipe!). But hold on a minute, he’s scraped most of the 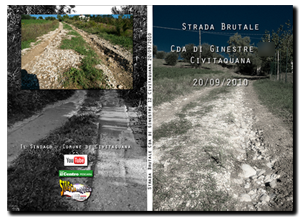 stone topping it had into the field and left it with a nice soil finish. Soil, feverishly sprouting vegetation and a few stray stones. August became a fading memory, then September along with it. The temperatures dipped and the sky became swollen with heavy storm clouds. And still no sign of the little man with a topping for our road.

Into October we swing and  the vegetation is growing nicely on our once flat road. A constant succession of tractors, trailers and tracked vehicles have seen fit to tear up the once smooth surface. Stones from pea-size to axle bending boulders now litter the surface. Then the rain finally arrived and the soil-topped road soaked it up like a man dying of thirst. The vegetation flourished and the first tentative vehicles sank an inch into the goo. What hope then of getting the Capo out on Anakee 2’s? Back to the TKC80’s I guess.

Is there a happy ending? No. We’re back on a campaign to get it finished and no doubt we’ll get nowhere quickly, hey-ho. Mind you,  I feel better now I’ve got that off my chest!

How much are all-terrain quads these days?